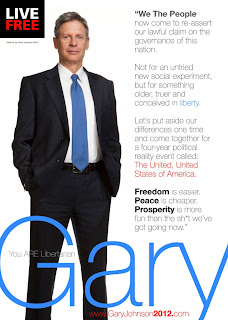 5% isn't bad for a candidate where 79% of the people polled have no idea who he is, as the latest PPP Poll in Colorado shows. Unfortunately it's down a point from August.

Q If the candidates for President this year were
Democrat Barack Obama, Republican Mitt
Romney, and Libertarian Gary Johnson, who
would you vote for?

The real surprise is that Governor Johnson hasn't gained any traction with his pro-marijuana stance given that Colorado's ballot question to legalize marijuana has a nine point lead.

Interestingly enough, it seems that Mitt Romney is winning over Johnson voters, along with undecideds, compared to previous polls. Romney also benefits from Johnson being in the race, with the former New Mexico taking slightly more from Obama.

Gary Johnson's fortunes could change very quickly however. Polls this early are generally based on name recognition and media coverage alone, but now that summer is over, people will focus more on the candidates and if Governor Johnson gets a boost, either by being in the debates or some other event that gains him media coverage, we could see his numbers rise.
Posted by Chris W at 9:54 PM