UPDATED 9/14 Who's Afraid Of Gary Johnson? Mittens And The GOP Part II (Pennsylvania) 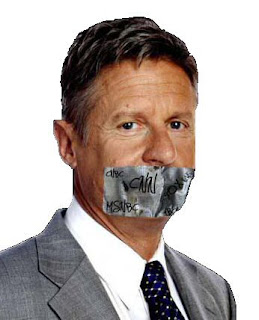 EDITOR'S NOTE 9/14 - Gary Johnson is one step closer to being on the ballot in Pennsylvania as a three-judge panel of the state Commonwealth Court ruled 2-1 that 9,000 disputed signatures are valid.

If this ruling stand, Gary Johnson should be on the ballot in the Keystone State as he only needs 620 of the remaining 13,000 to reach the required total of 20,601 to achieve a ballot spot.

Both sides are appealing the decision; the GOP wants this decision reversed and the Libertarian Party wants an additional 1,500 signatures certified where the signees omitted the year from the date that they wrote.

We'll bring you the final outcome when it happens.

Back in June, we reported that the Michigan GOP was trying to keep Gary Johnson of the ballot in Mitt's home state because he was THREE MINUTES late in filing his paperwork to be removed from their primary ballot.

Republican voters acting on behalf of the state GOP this week officially challenged the signatures submitted by Johnson, the former governor of New Mexico, who is seeking an equal place on the November ballot beside major party candidates Barack Obama and Mitt Romney.

Ron Nielson, senior adviser for the Johnson campaign, told PA Independent on Wednesday that the campaign submitted more than 49,000 signatures — more than twice the amount required to gain access to the ballot in Pennsylvania.

The signatures will be challenged in Commonwealth Court.

In order to qualify for the ballot in Pennsylvania, the major parties have to submit only 2,000 signatures, but third party candidates had to collect more than 20,000 this year.

Ballot access is the primary reason that 3rd party candidates have so much trouble getting in office and breaking the stranglehold that the Republicrats have on elected position.

Because they control the ballot access rules they make it as difficult as possible for 3rd parties to get on. In many states the signature requirement for a 3rd party or Independent candidate is 10 times greater than that of the two major parties. That means that these candidates need to spend more of their limited resources just to get a seat at the table. And if they are lucky enough to jump through that hoop they are summarily excluded from any debates.

They realize that they have a milquetoast candidate that is Obama-lite on many of the important issues. They know that if Gary Johnson gets a fair vetting by the American people, conservatives will come to see that he has a strong track record of fiscal reform from his two terms as Governor of New Mexico.

They can huff and they can puff but in Gary Johnson they have found someone who will not back down.
Posted by Chris W at 7:55 PM