Gary Johnson On The Ballot In NH

“As the first-in-the-nation primary state New Hampshire is an important focus for our campaign,” Governor Johnson said. “I’ve spent a lot of time in New Hampshire — even biking across it — and look forward to continuing to take my message to the voters of this great State.”
Posted by Chris W at 11:03 AM No comments:

Johnson is the only candidate promising to submit a balance budget to Congress in 2013. 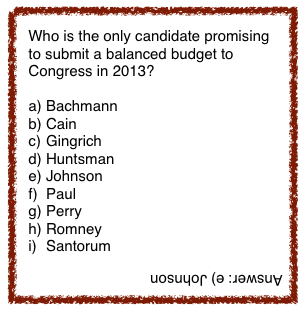 Gary Johnson made a series of promises at the Fox News/Google Debate.

“I promise to submit a balanced budget to Congress in the year 2013,” he said. “I promise to veto legislation where expenditures exceed revenue.”

Johnson hasn't released a budget plan yet, and he might not since he doesn't make proposals or promises lightly. My guess is that he would work it like when he was Governor of New Mexico. You bring together your departments and prioritize with the departments to create the balanced budget proposal. Johnson is very much a get involved and look at the numbers man himself. The federal budget proposal is something he'd be very involved in.

I've posted the above image around Facebook and Google Plus and at this point I've gotten quite a bit of feedback that I want to answer now so I'm not answering it in the comments.

Newt Gingrich has balanced a budget before when he was Speaker of the House under Clinton. He's a very smart man and will be releasing his "Contract With America The 2013 Version" at some point and I hope he includes submitting a balanced budget as part of his new contract, but as of right now he has not on his website nor in the debates made any promises about submitting a balanced budget in 2013 to Congress.

Paul released his budget/tax plan last week and has made a lot of news with it. It's a good plan, but it doesn't submit a balanced budget until 2015, and even then the debt is still increasing every year.

I'm not picking on Paul, but for my question that I'm giving to voters who want a balanced budget now. There is only one candidate making that promise. Gary Johnson doesn't make many promises, doesn't make promises lightly, is very careful about what he promises, promising only those things that he can promise. But what he is promising is big and he's the only candidate promising to submit a balanced budget to Congress in 2013.
Posted by Hardy at 4:33 PM No comments: