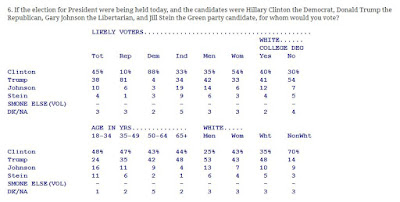 
Libertarian candidate Gary Johnson has hit his highest ranking in the polls.

This CNN poll Johnson polled at 13 percent with Clinton at 42, Trump at 37, and Green Party candidate Jill Stein at five percent.

In order to compete in national debates during the general election, a candidate needs an average of 15 percent in national polls.

With growing dissatisfaction for Clinton and Trump, Gary Johnson now has record numbers for a Libertarian ticket.
Could Gary be the unexpected winner in this election? Some say "no way" - But many also said there was "no way" Donald Trump would be the Republican Presidential nominee.

Good news for sure. Not to mention that FiveThirtyEight is predicting Gary to come away withn 7.8% of the popular vote come November.

If the presidential election were being held TODAY, and the choices were [Former Secretary of State] Hillary Clinton, Donald Trump, and [Former Governor of New Mexico] Gary Johnson, for whom would you vote? (Split sample with title/without title) 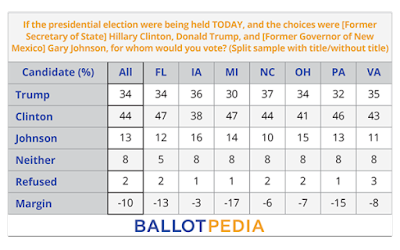 Via Memeorandum
Posted by Chris W at 8:42 PM 1 comment:


[T]he poll finds widespread dissatisfaction with the two presumptive nominees. In fact, little-known Libertarian Party candidate Gary Johnson gets a surprisingly large 11% of the vote when he’s included in the mix. The former New Mexico governor draws almost equally from Hillary and Trump — who get 39% and 35%, respectively, in a three-way race. 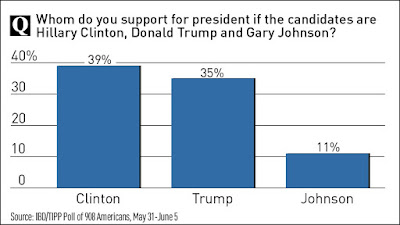 Hoping to emerge as a viable contender against the two major parties' nominees in the general election, Johnson says he aims to tap into voters' broad reluctance to fall in line behind Donald Trump and Hillary Clinton.

But Johnson needed to fend off challengers from more extreme wings of his party, originally falling five votes short of winning the 463 delegates needed for the nomination on the first ballot. Delegates voted a second time, giving Johnson the majority he needed (55.8 percent).

Johnson defeated five hopefuls to secure his place on top of the Libertarian ticket, which will likely be the only third party on the ballot in all 50 states.

Delegates have yet to vote on Johnson's hand-picked vice presidential pick, former Massachusetts Gov. Bill Weld. Many Libertarians here are wary of Weld, who joined the party less than two weeks ago and endorsed Ohio Gov. John Kasich in the Republican primary earlier this election cycle.

Unlike the primary and caucus system used by the Republican and Democratic parties, Libertarian presidential candidates have spent much of the past week debating and wooing delegates, who were free to vote for whomever they choose at the party's national convention.

The Libertarian Party faces an uphill climb to become viable in the general election. A recent Fox News poll shows Johnson at 10 percent in a race against Trump and Clinton, although polling tends to overstate the support of third party candidates.

Johnson was also the party's nominee in 2012, when he received 1 percent of the popular vote - topping 1 million votes for the first time in the party's history.

With little to no press, Gary Johnson keeps plugging along and has nowhere to go but up. The more polls he is included in, the more publicity and name recognition he will get. Also once Donald and Hillary really start slinging the mud, the electorate will be so turned off theat they will have no choice but to give Gov Johnson a look.

Voters were also asked to make their pick between Clinton, Trump and a potential third-party nominee, Libertarian candidate Gary Johnson. In that matchup, Clinton takes 38 percent of the vote, followed by Trump at 35 percent and Johnson at 10 percent. Seventeen percent of voters remained undecided.

The 10 percent support for Johnson is about twice as high as most tracking polls from 2012, when he also ran for president against Obama and former Massachusetts Gov. Mitt Romney.

The Morning Consult survey polled 2,001 registered voters from May 19-23 for a margin of error of plus or minus 2 percentage points.