Can Johnson do what Perot couldn't?

Someone mentioned Ross Perot in a comment on Governor Gary Johnson's Facebook page. It got me thinking, “Are there any similarities between Perot's campaign from 20 years ago to Johnson's campaign this year?”

I hadn't thought about Perot much in the last 10 years, but he was the candidate who got me excited about politics when I was at the age that I was able to cast my first vote for president.

I was a student working my way through college at the Department of the Navy. Perot's business background, outsider status, and focus on balancing the budget were a huge draw for me. Yeah, he had big ears and spoke funny, but I wanted to look at the substance of the candidates.

Perot was focusing on the big issue of the deficit from a business perspective. Working for the Navy I saw a lot of waste and inefficiency. I had some coworkers who were only voting for Bush simply because he'd keep their jobs as Window's Solitaire players. I, on the other hand, was getting a paycheck and seeing a large chunk taken out in taxes. I had to live within my means and thought government should be doing so, too.

I had some notion that America found her success because of innovation as a result of entrepreneurs taking risks, trying new things, and not following the same old way of doing things. The Democrats and Republicans were in control for 140 years, and they acted like a dynasty. I couldn't comprehend, and still can't, why is something good just because that's the way it has always been -- whether it was Galileo confronting The Church about the world being flat, Rosa Parks challenging 200+ years of laws treating blacks differently than whites, or Apple challenging IBM/Microsoft about how people should interact with computers. All systems can use a reality check from time to time. Perot was the 1992 reality check, and Johnson is the 2012 reality check.

Gary Johnson’s run for President as a third party candidate shares many similarities to Perot's run.

• Both were successful entrepreneurs.
• Main issue: Balancing the budget.
• Polling at 9% in nationwide polls prior to the Democratic/Republican debate.
• Large populist resentment toward establishment politicians.

At Perot's peak he was polling at 39%. This was after he was included in the debates with Bush and Clinton. He focused on the budget, and he had some good zingers. Americans were ready for a change.

Things unraveled for Perot when he dropped out of the race due black helicopters and some doctored photos that someone was going to release to ruin his daughter's wedding. Although he reentered the race in October. His momentum had crashed, and he only managed to win 19,741,065 million votes or about 19% of the vote. If he hadn't dropped out and back in many people think he could have won the presidency.

Even with his 19% showing in 1992 only 1/3 of voters thought a third party candidate was needed. Twenty years later this has doubled to 2/3s of voters willing to vote for third party candidate, with the greatest support among the independents. The major parties have been losing membership and the independent ranks have been growing. Congressional approval ratings are the lowest they have ever been. We see a huge popular resentment from both the right with the Tea Party, from the left with The Occupy Movement and with many independents empathizing with one or the other or both of them. We all oppose crony capitalism. We all oppose the unfairness of politically connected people getting loopholes in the tax code. We all would like to see our taxes lower. Johnson's third party run appeals to the current popular resentment across the board.

Moving forward:
Perot's success was similar to what we've seen in the GOP primary this year - a rotating flavor of the month based on the media's highlighting one of them after a debate performance. Perot received a similar and substantial bump jumping from 9% to 39% in the polls after being able to debate Clinton and George H. Bush.

The Democrats and Republicans saw the debate criteria used by the League of Women Voters as broken. They took over the debates with a new "non-partisan debate commission" made up of former RNC and DNC chairs and set the minimum polling level to 15% to make sure another Perot like situation would be unlikely in the future.

Johnson is polling at 9% nationally so he is within striking distance of the 15% in national polls. He will need some help from the liberty movement which is currently focusing all their attention on Ron Paul. [I'm assuming the GOP establishment won't allow Paul to be their nominee, but Paul will finish a strong second place. I also don't think Paul will run third party due to a variety of reasonings including sore loser laws which might keep him off the ballot in some major states like Texas, and because he's probably looking toward his son's Rand's future in the GOP as a potential presidential candidate for 2016.] Paul will stay in the GOP race until the GOP convention in August at which time he might endorse Johnson's candidacy. Paul has stated in the past that "Johnson's the only candidate he could possibly support." Even without an endorsement many of the Paul supporters already have their eyes on Johnson as their backup candidate, so Johnson could see a huge influx of money and volunteers at the end of August which will be timed just right to start attracting the typical voters who aren't paying any attention to politics now, but will pay more attention in September and October. Johnson getting to 15% and being in the debate with Obama and Romney will boost Johnson's name recognition and with a decent debate performance and another joke about his neighbor’s dogs he could easily jump to 30% in the polls.

After people hear about Johnson it's a simple matter of voters learning Johnson's background. Successful entrepreneur, successful 2-term Republican governor of a democratic state who is still very popular at home, someone who puts issues before politics, and who's views line up with the majority of America. He never courted the extreme left or right, but talking about issues the the majority of America agrees with and bringing his track record as a businessman and a Governor to help fix the current problems in our country.
Posted by Hardy at 9:47 AM 3 comments:

Jobs are the top issue on the minds of many Americans so what are the front runner candidates records on jobs for their respective parties? 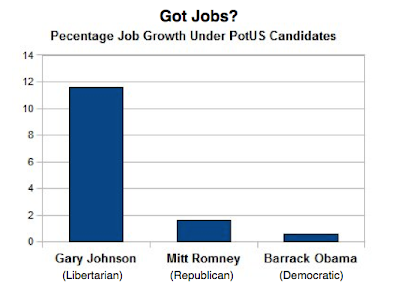 Percent Job Growth Under POTUS Candidates (Note: I used fiscal years Sept 09' - Sept 11' for Barrack Obama otherwise he would be negative starting from Jan 09' - Jan 11'). This data is seasonally adjusted data from the U.S. Bureau of Labor Statistics.

P.S. I created the graphic and release it to the public domain. I'm not a professional and incurred no cost in it's creation so feel free to use it without charge.