One of the key reasons why Governor Rick Perry faired poorly in the FOX Florida Debate was the gang up of other “conservative” candidates on Perry, the front runner. This, of course, plays into Mitt Romney’s hands but does nothing to enhance the candidacies of Rick Santorum, Michelle Bachmann or even “moderate” Jon Huntsman Jr.

A wiser strategy for both Santorum and Bachmann would be to take on Romney, demonstrating to the conservative and Tea Party base an ability to take on the establishment candidate. Their goal should have been to be more effective on the attack against Romney than Rick Perry was.

Shooting Perry in the back makes little sense. I reject the idea of a “conservative intramural” to weed out who will face Romney. This race is wide open and Mitt Romney is the weakest front runner in recent history.

The most interesting thing in the debate was the national debut of Governor Gary Johnson of New Mexico, a pro-pot, anti-war libertarian with a record of cutting taxes and spending and creating more jobs than Mitt Romney in Massachusetts or Governor Rick Perry in Texas.

It was quite frustrating to see the mediots exclude a legitimate candidate like Governor Gary Johnson even though he was polling ahead of their darlings Rick Santorum and Jon Huntsman.


Gary Johnson, the Republican presidential candidate who has labored in obscurity, is about to get his moment in the spotlight—for one night, at least.
Click here to find out more!

Johnson will be included in Thursday's Fox News debate in Orlando, the first time he will share a stage with his eight rivals—over the objections of the Florida Republican Party.

The former New Mexico governor won the right to participate, according to Fox sources, by cracking 1 percent in the latest five national polls in which he was included—Fox News, CNN, McClatchy-Marist, ABC, and Quinnipiac—which was the criterion the network had set for inclusion.

Johnson is a quirky character, a libertarian who wants to legalize marijuana and is opposed to a border fence to stop illegal immigration. But he has attracted a passionate if tiny following while mostly flying below the media's radar.

The Florida GOP establishment isn't too pleased about his inclusion however, I guess they want more of the Mitt and Rick show.

Via Memeorandum
Posted by Chris W at 9:00 PM No comments:

Tell PPP To Include Gary Johnson In GOP Polls

Public Policy Polling (PPP) has removed Sarah Palin from their 2012 GOP polls and is asking for suggestions on who, if anyone, should replace her. 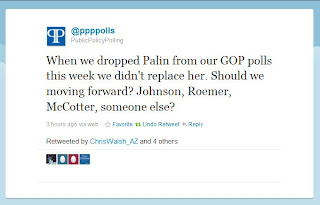 Please let them know via Twitter, at @ppppolls, that former NM Governor Gary Johnson deserves to be included in their GOP polls.

Not only is Governor Johnson, a 2 term governor who vetoed 750 spending bills and left the state with a budget surplus, a legitimate candidate for President in 2012 but he has been polling better than Rick Santorum and Jon Huntsman in polls that he has been included in and also within 1 percentage point of Herman Cain.

It is not up to the media and polling organizations to determine who should be in the race and by excluding people such as Gov Johnson and Rep McCotter from polls and debates, they are taking on the role of kingmakers and taking the choice away from you and I.

Via Memeorandum
Posted by Chris W at 6:02 PM 1 comment: