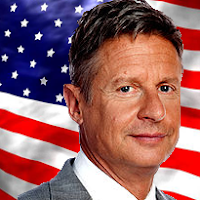 If you are one of the 60% who believe that the war in Afghanistan is no longer worth fighting, you have only one candidate that will be on the Presidential ballot in November who will put an immediate end to the hostilities; Gary Johnson.

The choice is yours; are you going to vote your conscience or vote for a candidate who will continue the killing of American soldiers?


Former New Mexico Gov. Gary Johnson is branding himself as the anti-war candidate of the 2012 campaign, dismissing both President Barack Obama and Mitt Romney as standard-bearers for “interventionism.”

Johnson, who dropped out of the GOP primary and is now seeking the Libertarian Party’s nomination, said opposition to the war in Afghanistan represents a potent force in presidential politics — one that neither major-party candidate is in a position to channel.

“Get out tomorrow,” Johnson said in an interview with POLITICO. “We should have gotten out of Afghanistan 11 years ago. Eleven years ago! Romney is saying we should stay in Afghanistan until the mission is accomplished. What does that mean?”

Obama, on the other hand, has “doubled down” on an unpopular and directionless war, Johnson said. What’s more, he warned that the White House could try to gain electoral points with a strike on Iran before the November election out of a “political calculation … that bombing Iran shows strength.”

If Johnson wins the Libertarian nomination next month, he would become the only general-election candidate with a down-the-line stance against the unpopular war. For a long-shot third-party candidate, who will essentially be campaigning for a place in the fall debates, Afghanistan is conceivably the kind of issue that could draw national attention to an underdog effort.

Asked if he believed the country was more secure now than it was when Obama took office, Johnson argued that intervention in Afghanistan — which he initially supported — and the war in Iraq have had a strongly negative effect on national security.

Citing the alleged massacre of Afghan civilians by U.S. Army Staff Sgt. Robert Bales, Johnson asked: “What does that do to that village and to Afghanistan and what they think about America?”