Governor Gary Johnson has Qualified for the Debate!

Does Governor Gary Johnson qualify for the debate using the debate partner's criteria?
First we need their criteria:

The Union Leader and its partners invited every potential candidate who met any one of three standards:

Let's take the second criteria since Johnson only needs to meet one of the three to qualify and debate sponsor CNN didn't include him in their April polling.

Johnson only polls at 1% if we use CNN's poll question that includes the unlikely and undeclared candidates of Giuliani, Palin, and Bachmann. Johnson is the second choice for 2% of respondents, and when Giuliani and Palin are removed from the list of candidates then Johnson is at 2%. 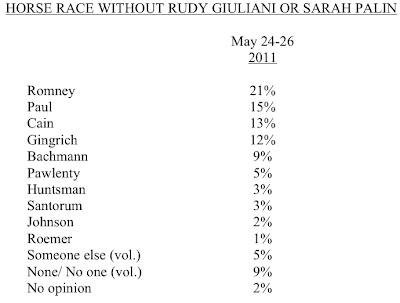 A similar story plays out in Gallup's poll. Johnson is at 2% when undeclared candidates Palin and Bachmann are included, but when excluding Palin then Johnson is at 3%.

The last poll is the most difficult because of the polling firms listed as acceptable I couldn't find polls from most of them and the polls from AP didn't include Johnson.

Quinnipiac had a poll from April 26-May 1 with Johnson at 1% which included Huckabee and Palin. If we count this as a May poll then that would round out the criteria of being in 3 national polls. [Added: thanks to Kreationz commenting and pointing this one out.]

There were two respected polling firms that listed Johnson in May:
Harris Interactive has him at 1% with a poll including Palin, Bachmann, and Guiliani.
Zogby International has him at 1% with Palin, Christie, and Bachmann in the poll.

Conclusion
By using the debate sponsors' own objective criteria Johnson does average at 2% in at least three polls in May. The only question is why are they choosing to exclude one of the most qualified people running for president?
Posted by Hardy at 7:25 AM