Johnson wins election if based on issues

What if people voted on what candidate aligned with them most closely on issues and not based on who the media gatekeepers thinks you should vote for? 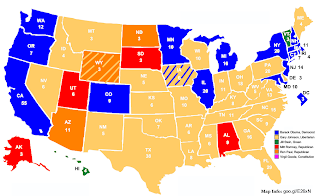  
The map is created off the results of over 600,000 quiz takers on the iSideWith site. Users answer 36 questions that cover a range of issues from social, environment, science, foreign policy, domestic policy, immigration, the economy, and healthcare. Their answers are matched up with the candidates answers and then they are shown who they align most closely with.

iSideWith generates state by state breakdowns so you can see which state supports which candidate. I tabulated the data and assigned the electoral votes to the winner of each state. iSideWith included a couple candidates in their questionnaire who will only be on the ballot in a handful of states so I excluded them, but I did include the Constitution, Democrat, Green, Libertarian, and Republican candidates.

Barack Obama, as the incumbent, wins a total of 217 electoral votes in 16 states. He wins the states you’d expect him to win - the west coast, north east and a few in the great lakes region.

Jill Stein (Green Party) beats out Obama in Vermont and Hawaii which are two of the most left leaning states and wins a total of 7 electoral votes.

Virgil Goode’s (Constitution Party) best showing was 3rd place in South Dakota, but generally placed in the back of the pack taking sixth in 43 states.

Here is the spreadsheet with the calculations of the results based on iSideWith.com’s data as of July 18, 2012, at approximately 8PM ET.