What about former Republican governor of New Mexico, Gary Johnson, who is favored to top the Libertarian Party ticket? He ran in 2012 and received almost one percent of the vote nationally. 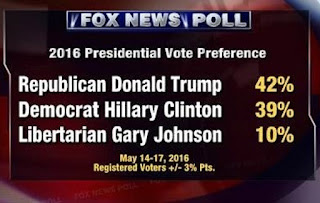 The poll finds Johnson garners 10 percent in this hypothetical three-way matchup. But that wouldn’t change the race, as Trump still holds the edge over Clinton: 42-39 percent.

The Fox News poll is based on landline and cellphone interviews with 1,021 randomly chosen registered voters nationwide and was conducted under the joint direction of Anderson Robbins Research (D) and Shaw & Company Research (R) from May 14-17, 2016. The poll has a margin of sampling error of plus or minus three percentage points for all registered voters.

Via Memeorandum
Posted by Chris W at 7:39 PM